Plutus is a platform that has been building a connection between cryptocurrency and traditional finance since 2015. The company behind Plutus is mainly focused on their Visa card offering; however, they operate a P2P exchange for their users as well. There are a number of positive aspects of the Plutus Visa card, but there are also some drawbacks.

The card is currently only available in Europe, so potential customers in the United States, China, and other countries where cryptocurrency is popular will need to look at other options. Plutus also has no native support for Bitcoin, and it currently only works with ETH and their own proprietary token (PLU). That said, the Plutus Visa card comes with reasonable fees and plenty of cashback rewards for those who do not mind the heavy integration of the PLU token into the platform. 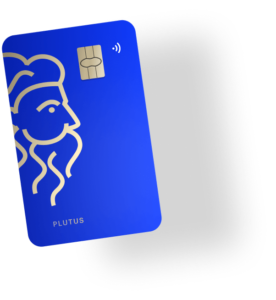 Details and information about the Plutus Debitcard

Plutus debit card fees vary between free and premium users. Premium users get a card for free and benefit from higher limits and lower fees at a cost of £/€4.50 per month.

The Plutus card range of services often overlap with those of the other Plutus finance applications i.e. the mobile app and DEX. Nonetheless, the card functions well on its own allowing instant payments whether in cryto or fiat currencies. However, before spending, one has to top up their card and so we shall review that first.

As aforementioned, users can deposit either fiat or cryptocurrencies. Unfortunately, Plutus does not have a wide range of currencies as it currently only supports Ethereum (ETH) and Pluton tokens (PLU). The company has chosen to initially focus on the Ethereum ecosystem, which means that you cannot use Bitcoin, the most popular cryptocurrency, on your Plutus card, for now. The lack of variety by Plutus also extends to fiat currencies as they currently only support the Euro (EUR) and the Great Britain Pound (GBP). Similarly, users will not be able to load up, spend or even convert their holdings to the US Dollar (USD), the most commonly used fiat currency.

Where Plutus lacks in currency diversity, they make up for in the variety of deposit options. The company allows users to create Instant Current Accounts or European IBAN depending on their location. This process can be completed within minutes on their website thus saving customers the hassle of visiting a bank. These account numbers enable customers to easily deposit fiat currencies from anywhere in the European Economic Area and spend them as they wish.

In addition, Plutus card also supports deposits from both Samsung and Google Pay. The team is also working on ways to include Apple Pay support.

Plutus card supports crypto-fiat and fiat-crypto conversion. This functionality enables the users to top-up their Plutus debit card in any of the supported currencies and easily convert to their currency of choice whether for spending, or investing purposes. The Plutus DEX, a peer-to-peer trading platform that does not hold the customers funds, supports this. The decentralised nature of the exchange means that customers are always in charge of their private keys thus ensuring the security of their funds.

The Plutus debit card performs the same functions as a regular Visa debit card. As such, the card is acceptable by over 40 million merchants across the world. Card owners can use the Plutus debit card to make instant payments anywhere with a Visa acceptance logo in nearly 200 countries.

While the Plutus Visa card’s relatively high cashback rewards and perks may appear attractive at first, there are still some drawbacks to consider with this card. For example, those cashback rewards are all denominated in PLU. Additionally, the extra Plutus Perks program requires users to not just receive PLU tokens but also hold them. An additional membership fee is also required to access these programs. Some users may prefer to use a simpler setup, even if it means the cashback rewards are a bit lower.

Another dealbreaker for some potential Plutus Visa cardholders is that there is no native support for Bitcoin. In fact, ETH and PLU are the only tokens supported by the platform at this time. Avoiding the world’s largest and most popular cryptocurrency is quite an oversight; however, it’s possible that BTC will eventually be added to the platform via one of the many available bitcoin-backed ERC-20 tokens that have been gaining steam in 2020.

The Plutus crypto credit card also has high fees in some situations. For example, there is a 1.75% fee on moving ETH onto the card if the user is not on the pro or premium plan. Perhaps more troubling, the ATM fees involved with the Plutus Visa card are a bit high compared with some of the other options on the market. On top of the base €1.35 fee for domestic withdrawals, there is also a 1% charge on the transaction’s total value. So, if you’re withdrawing €300, you’re looking at an additional €3 charge.

A final downside of the Plutus Visa card is that it is currently only available in Europe.

Two major issues plaguing the cryptocurrency space is user trust in third parties and the difficulty of using cryptocurrencies. Plutus card eliminates these worries by ensuring their users retain custody of their assets and providing a simple integrated interface that allows seamless operations.